Tucked away in the totally underrated shopping mall, Far East Shopping Centre, lies a cosy and indie restaurant, called HOB NOB Café Bar. It’s on the 3rd floor, and it is a little hard trying to find the restaurant. Come up the escalator, give a right turn and keep walking straight. You’d see the restaurant… soon. If you can’t find the restaurant, take reference from the male toilet next to the escalators. Face in the direction away from the escalators, walk straight and give it a right turn. If all else fails, cry. Haha I’m kidding. Just keep walking around the 3rd floor until you find it. The mall isn’t that big anyway. 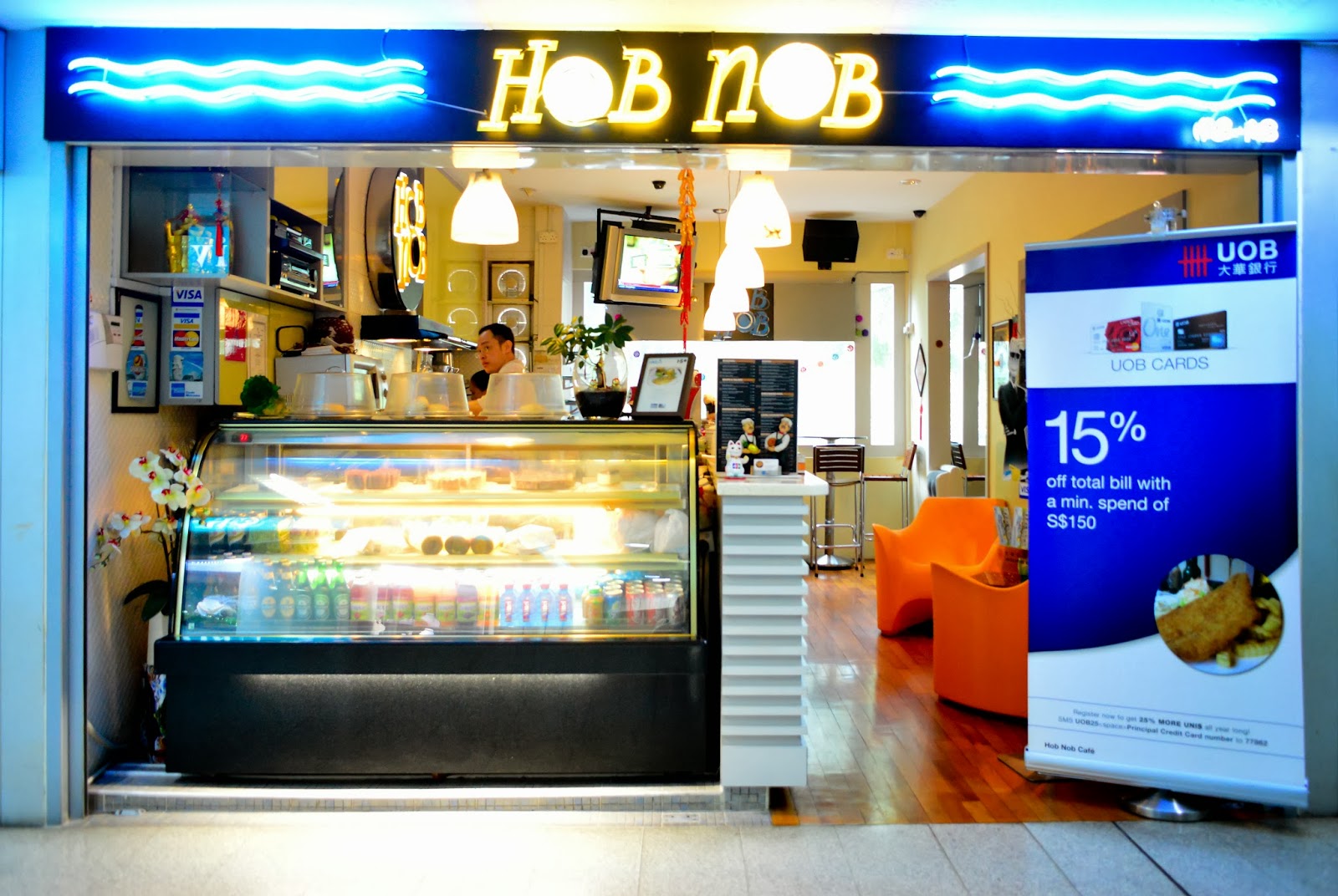 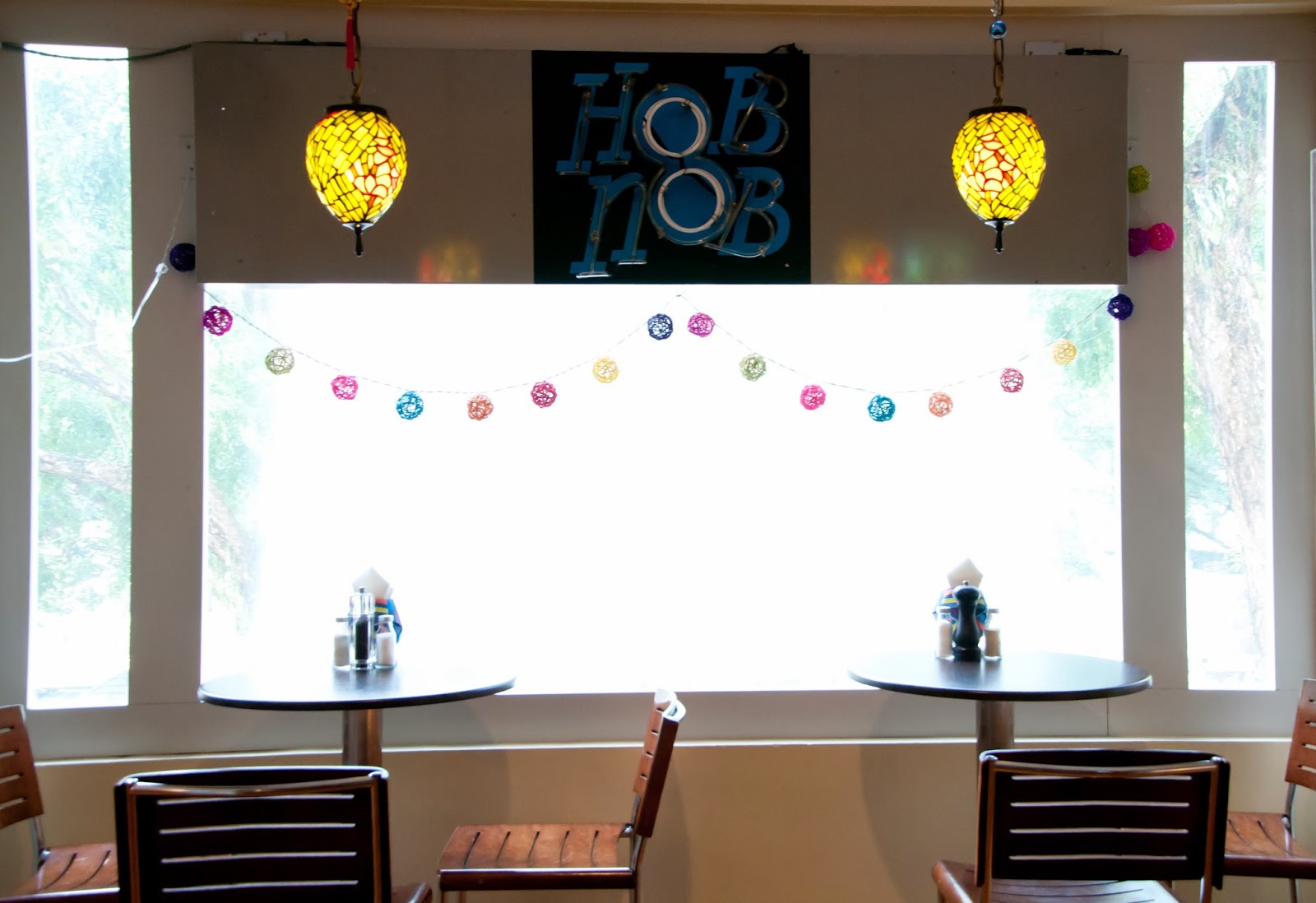 I must take some time to describe the interior of this place. Tummy Tyrant 2 and I were really amused at how the atmosphere in the restaurant was like. It was something in between a romantic restaurant because of the dim lighting, and a funky hangout place because of how the lights were designed and the modern feel from the chairs and tables. A very unique restaurant indeed. The picture below is edited where the restaurant looks brighter, though, to allow give you a clearer idea on how the restaurant looks like. 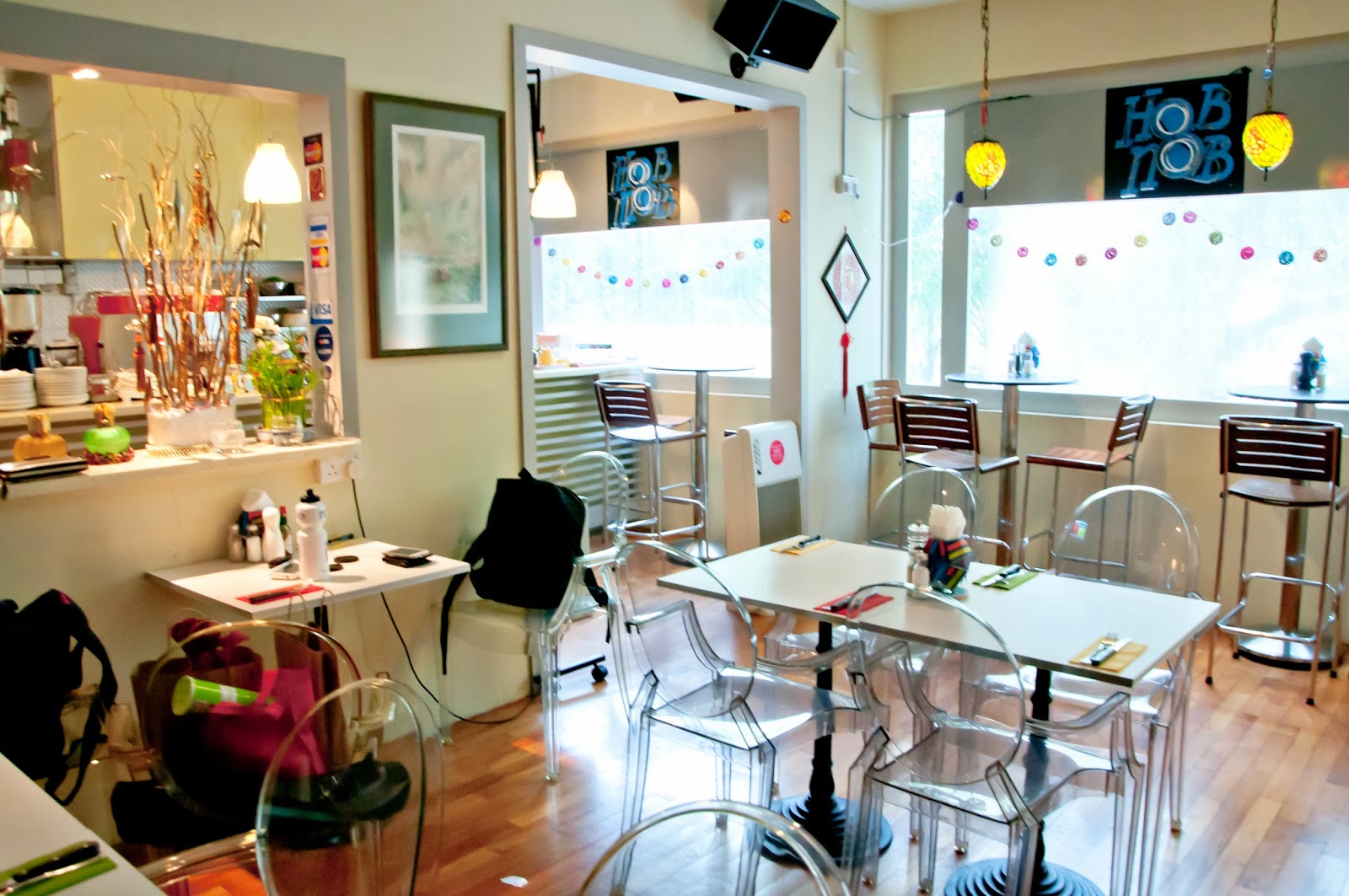 We have visited this place twice, and on both occasions, Tummy Tyrant 2 and I can agree on one thing – the creamy dory baked fish tastes so amazing. We will give our take on that dish a bit later. I tried the Spaghetti Prawn Aglio Olio, where I did not have such an amazing time. 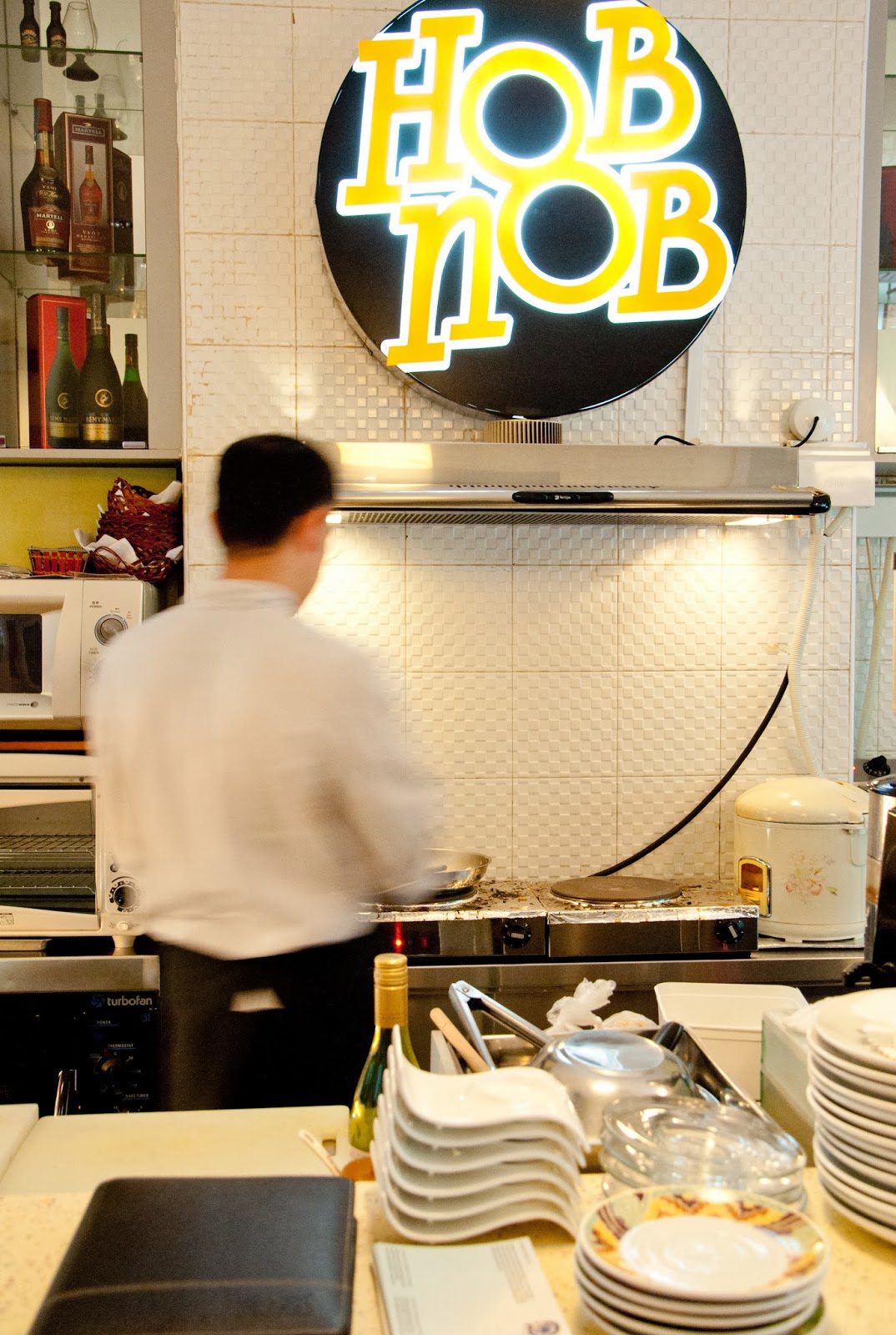 The restaurant has an open kitchen. The chef seems like a very nice person. When we asked if we could take pictures of him, he allowed it gladly with a smile. 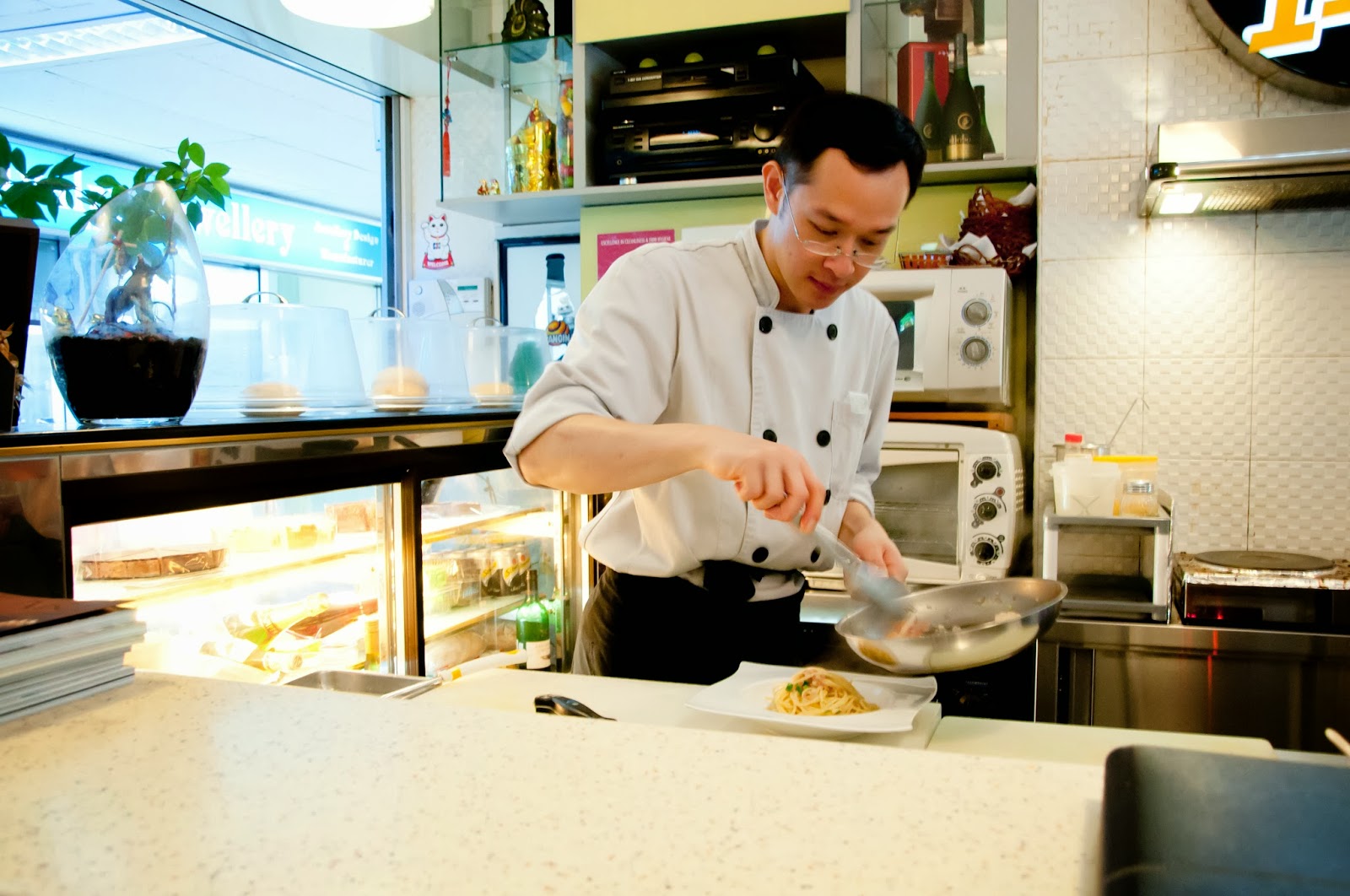 This Café Bar serves a whole range of dishes, from local dishes such as Nasi Goreng, to Western meals such as Fish and Chips. This place also serves Tom Yum Spaghetti with Seafood which is also very highly regarded. Now, onto our verdict for the food. 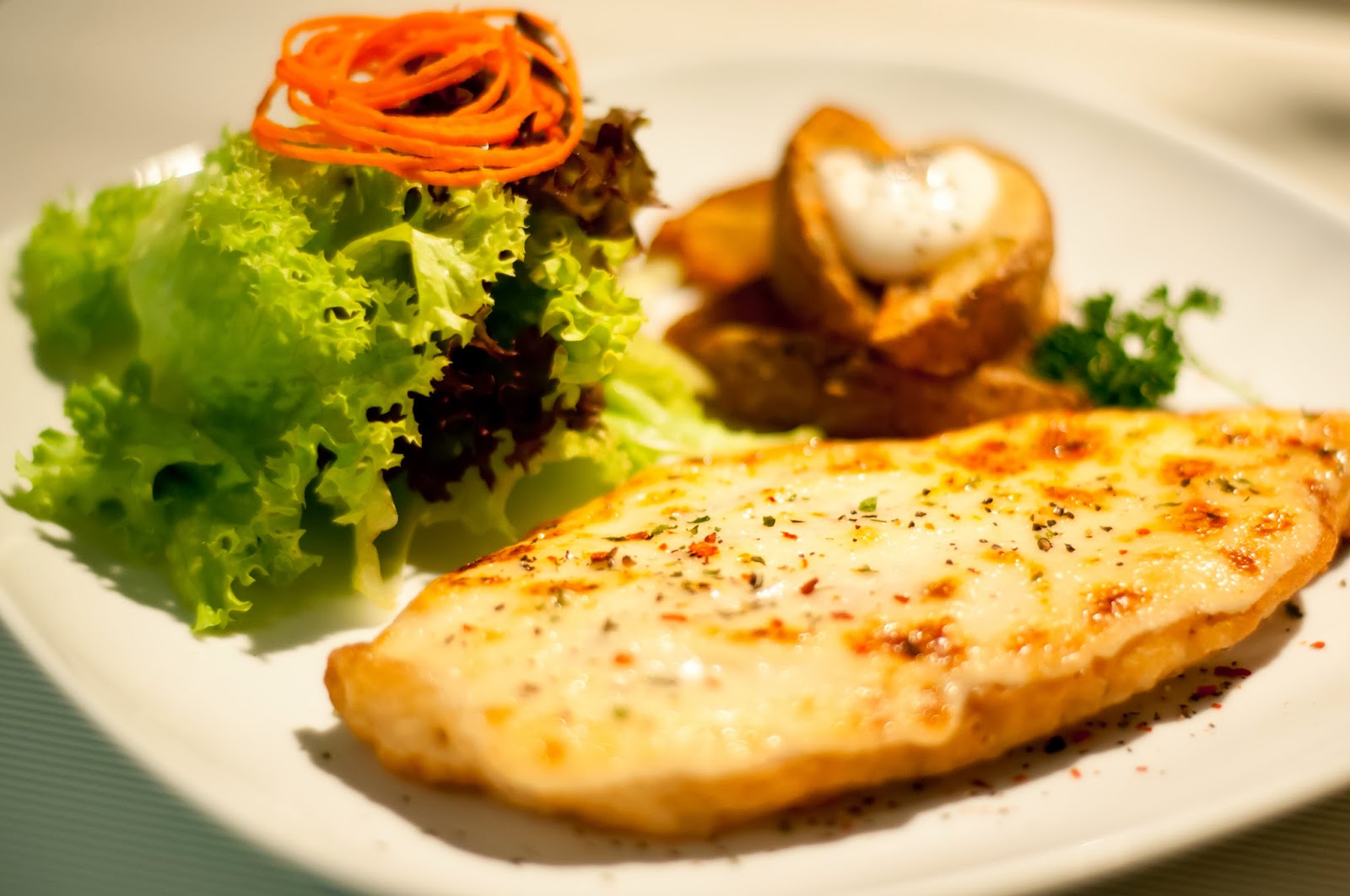 Now fellow readers, mark my words – this dish, the Creamy Baked Dory Fish ($15.80) is amazing. Very, very good food. It is such a delightful dish with very well balanced flavours. It is cheesy, creamy, savoury and the best of trait of all – consistent. On both times we had this, the same satisfaction overwhelmed us. It is such a wonderful dish to have. A must try when you’re here. The dish is slightly pricey, but worth every single bite. Tummy Tyrant 2 and I agreed this is a dish which we will not get sick of, if we had to eat this every single day in a month. On the menu, you will realise that some dishes have a “Hob Nob logo” labelled to them.  This dish has a Hob Nob label. I am sincerely excited to try other dishes with the label. Such a good dish. Such an amazing dish; worth every cent.

The next dish that we will be talking about is the Spaghetti Prawn Aglio Olio ($13.80). I apologise to you, Hob Nob. This dish is not very good. 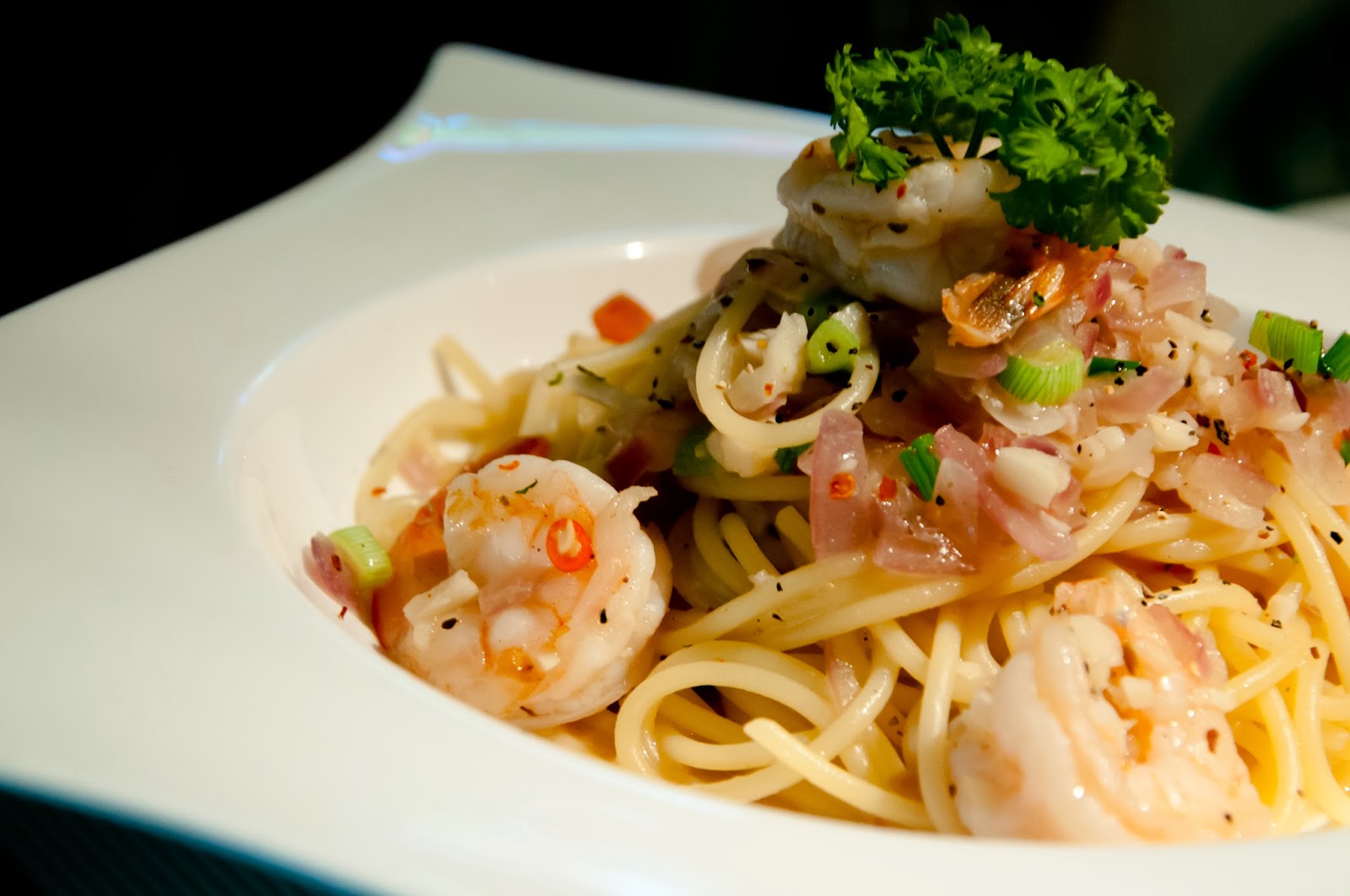 The dish looks good. Presented well. I bought this dish because I wanted to try some good Aglio Olio, such that I can replicate the dish myself. I am learning how to cook right now, and this is one of the dishes which I am particularly interested about.

I was curious about the use of onions in the dish and I have confirmed that onions are a bad addition to the dish. The spring onions make it worse, but the chilli is needed for this dish, but not in too excessive amounts. 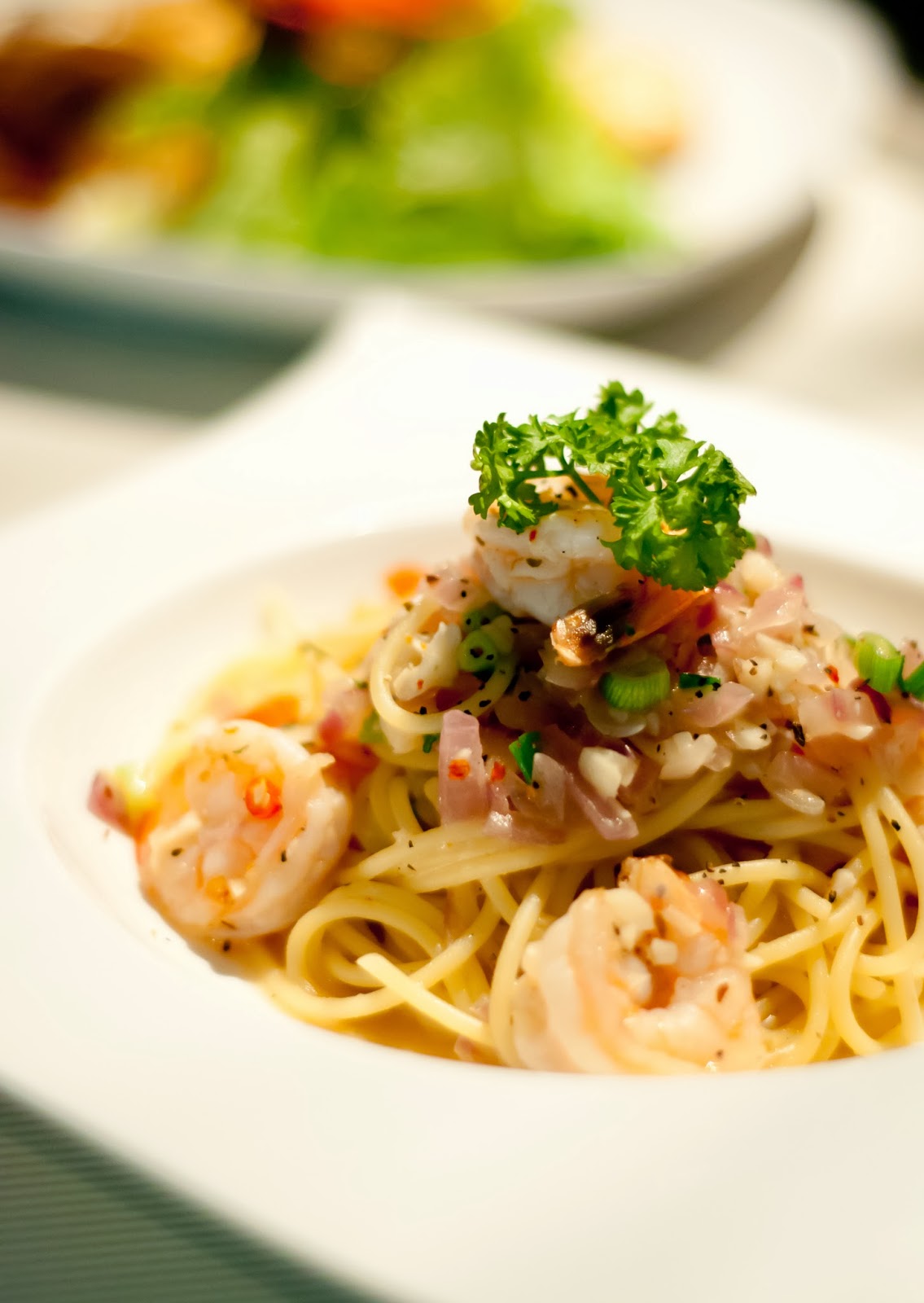 Firstly, the flavours of garlic which is supposed to be in this dish is non-existent. The flavours from the chili overpowered the tastes by the garlic. Secondly, the prawns were not very fresh. It tasted like something I would have gotten at home, or maybe from a food court; perhaps worse. Thirdly, I had to add black pepper to the dish for some form of flavour, but my throat was left dry afterwards. My second attempt for my Aglio Olio tasted slightly better than this, but not very good either way. I was disappointed at the Aglio Olio which I cooked, but even more disappointed that I paid $13.80 for this plate of food.

The fish however, is brilliant. Tummy Tyrant 2 agrees that it is definitely worth a trip down just to try the fish. The fish is so cheesy and creamy that I would say it is like having sex in the mouth. I really wonder how they made this piece of fish taste so good.

I remember the Pork Ribs as something which was not bad, but not fantastic. We were having lunch with our tutor on that day, and our tutor very generously shared a bit of her Pork Ribs with us. Tummy Tyrant 2 thought it was pretty average. The Pork Ribs has a “Hob Nob logo” labelled to it. Something we probably would try again just to tell you guys how it went.

Lastly, the chocolate truffle cake ($8.80). Unfortunately, we also do not have pictures of it yet. We surprised our tutor with her favourite cake from Hob Nob and have not tried the cake personally. A cake that price raises our expectations of its greatness. We will give a review on it one day.

We will also try the Tom Yum Spaghetti with Seafood and the Fish and Chips one day. Stay tuned for that, because we’re not done with Hob Nob.

Tummy Tyrant #1: Photographer. Sports enthusiast.
Tummy Tyrant #2: Whimsical food fanatic. When I'm not pretending to be a mythical creature/When I'm not studying, I stuff myself with copious amounts of food. Soft spots: Matcha/Green Tea, Tea, Ice Cream, Chocolate, Desserts, Seafood, Food, Food, Food.
Feel free to contact us at tummytyrants@gmail.com to provide feedback/suggestions or if you want to tag along on any of our food trips! :)